Travel Tips for the Foodie-Paradise

Some love the city, others don't like it at all.
I, Alex, was once again in my favorite city on the road and would like to share my impressions with you.
With 18 I was the first time in the city of the sun and serenity, which invites one to fall in love only so.
The first time I was completely alone and looked at the whole city on foot.
This time friends were already there because of the Sónar and their off-events and I joined spontaneously.
But in the end I was almost alone, because I wanted to discover the culinary side for you and not celebrate.
But for that reason, I also have a few tips for you.
First I would like to tell you what has changed in my attitude towards the city.
The first time I was still relatively naive and I didn't think of walking alone through the city at all in the middle of the night. I just thought that every city is like Munich. In the end, I was quite lucky that I came across so many special people.
Even then I was walking around with my big SLR camera and was always reminded that I had to take care of it, because there are a lot of pickpockets in the city.
I thought to myself, "Oh, that doesn't happen to me!", as careless as I was. Jajaaaaaaaa.... and then I just wanted to sit down on a park bench, took a closer look at the city map and put my camera next to me.
Fortunately there was this voice from the warnings and when I was looking down to my camera, there was this hand.
I immediately grabbed my camera, turned around and there stood the 9 year old boy who looked at me first with a frightened and then with a mischievous look. What do you want to make big, except curse briefly and then be happy that you escaped a theft.
So let it really be said to you: Watch your pockets!
So this time I walked around with a belly bag - all of the Touri.
And with the red trousers we come immediately to the next tip.
In Barcelona there is a beautiful beach, for which you should definitely take half a day.
BUT.... I was there in the middle of June and, if you are planning your trip in summer time, then listen to the man who announces the nice instruction through the loudspeakers, as a newcomer at best not to lie down in the blazing sun and you should definitely apply a sun cream with a very high sun protection factor. And once again - as careless as I am - "Oh I was in Croatia 2 weeks ago - I am perfectly tanned"...
Do you know that when the skin tickles slightly and you know "oooh now it was a little too much sun"?
If that happens to you in Barcelona on the beach during the midday sun, then you have already lost.
The top I'm wearing is actually a jumpsuit and was great for the warm temperatures.
But when on the day after the beach visit only a small sunbeam shone on my legs, I thought they were burning - I was burning.
After 45 minutes I had already given up the fight with the pain, ran to the next best clothes shop and bought the trousers.
The attitude to life was like day and night, which I told my roommate at least 300 times. 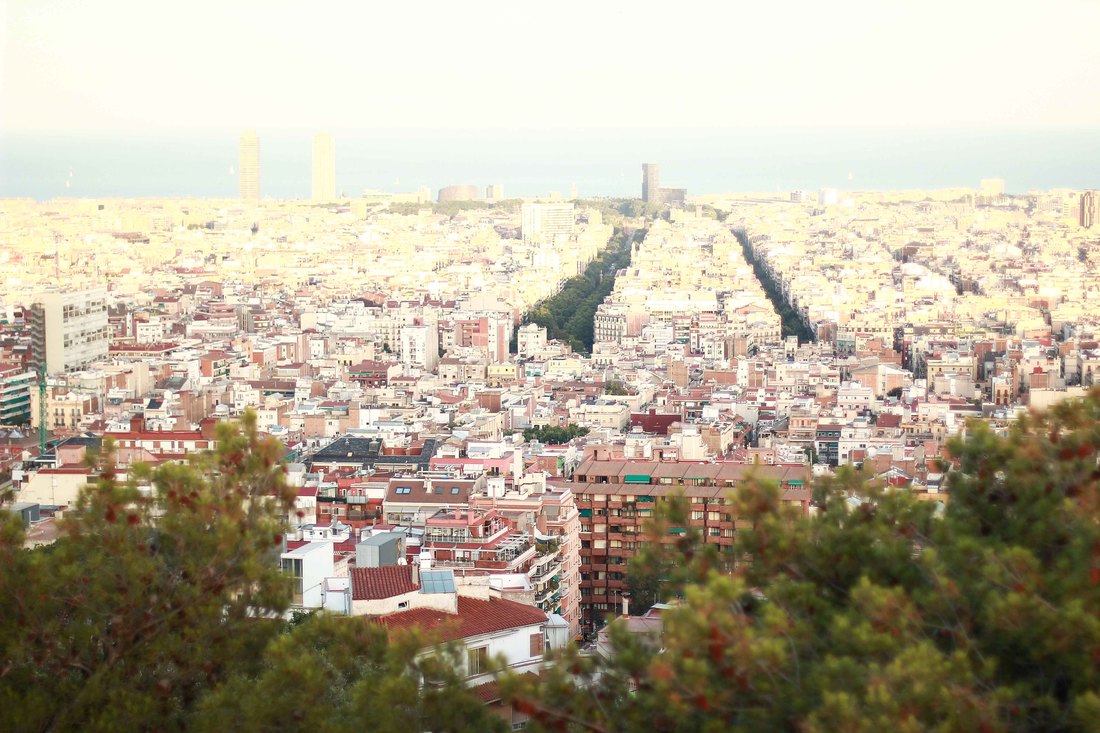 Und what is there to see in the city?

There are so many places of interest that you should definitely visit.
However, for some it is enough to have seen them only from the outside. Because Barcelona offers so much that on the one hand one would not be able to see everything in time and on the other hand not financially. Especially if one is still a student, as I am.
But I will make you a list of the most beautiful places:
The Parc Güell - what can you say about that, I was stunned. The park is just beautiful and can make you happy.
There is also the terrace for a wonderful view over the city and if you like also for the sunset and another platform to breathe in the whole city. But you should make sure that you get a ticket for the sunset. When we wanted to go to the terrace this time, all tickets had already been sold. If not everything deceives me, however, the ticket seller said that the entrance is free for approximately 1 hour from 21 o'clock (thus after the sunset). After that the park closes. I also advise you to take the bus to the park, if you don't feel like running up, strength, muse or whatever. Because the ascent is relatively steep.
The Sagrada Familia - sometimes I think they don't want to finish it on purpose, because it has a certain charm and keeps its story alive, but also unfinished it is simply EPICAL.
Casa Milà and Casa Batlló - I have to admit that I only saw both of them from the outside, but those who like architecture and art will love the façade alone, planned by Gaudi!
La Rambla -  That's mainly, like a shopping street and great to just want to walk in front of you, but the most important thing is that there's also the Mercat de la Boqueria and that's a pretty awesome food market. There is simply EVERYTHING. It's a bit touristy and sometimes expensive, but once you've seen the food there, the water will melt in your mouth. There we have also discovered something really great and there are also small tapas snacks. You can sit around the kitchen and choose different tapas and wines from the menu, which are prepared right in front of you. Unfortunately we had already had a brunch, otherwise we probably would not have moved from the spot for 4 hours and only ate.
Plaza de España - from there you can walk directly to the Palau Nacional. Here you can prepare yourself for a good butt-training, because stairs are like crazy.. But it's worth it. It's best to take a snack with you, sit up on the stairs and enjoy the view.

Now you could continue writing "something" (2 hours), but in the end I only saw a lot of things from the bus and will only really look at them during your next stay in Barcelona. I was also at Camp Nou, but I don't know what to say about it. It is a football stadium... yes, I probably could have imagined from the very beginning that it wouldn't really flash on me.
But what really flattened me were the cafés and restaurants I visited this time.
You can find my impressions on the Barcelona Restaurants & Cafés Blog.

Enclosed some pictures of the Mercat de la Boqueria:
My conclusion on the city?
Actually I intended to move to Barcelona for 1 year and live there, but now I'm not so sure anymore.
That's not because I'd gain 40 kilos there (if that's enough), but because I looked at the city from a completely different angle...
Shortly before the trip, I watched the movie "Biutiful", which among others is about the other side of the city. Because you will see a lot of illegal street vendors selling counterfeit goods and as a blind tourist you see beyond the origins of the whole thing and prefer to dedicate your gaze to the beautiful sights. Or even better - you buy some of the fake things because it's so cheap.
The film shows quite well where all these things come from and under which living conditions the poor population of the city lives.
If you walk through the city with your eyes preloaded, then you will notice a lot more than just the beautiful side and to be honest it even made me a little afraid. In the end, it's simply the naked truth you should deal with when visiting a foreign city. Nevertheless, it is really hard for me and makes me sad.
In contrast to that, I also have to emphasize the warmth of the people in Barcelona.
For example, on the day of my departure, I totally miscalculated with my cash.
Actually, I had already prepared my way to the airport in the assumption that it would be as easy as in Berlin or Munich.
HA HA ... when the city doesn't want to fool you. My money had only been enough for 1 ticket. So I got on the bus where the bus driver told me: You can't buy an airport ticket from me, so please get off. When I arrived at the next metro, I bought myself an airport ticket, took the metro to the next stop to change to the train from there.
Yes and there's the hook: If you buy a Metro-Airport-Ticket, you can't take the train. But once one is outside with the ticket from the Metro, one does not get into the Metro with the same ticket.
I, no money, no more time and no admission to Metro, then simply ran to the cleaning lady in the station, somehow wanted to explain myself in Spanish, luckily she understood me immediately and let me through the admission with her ticket & still wished me good luck.
I needed that because I was much too late and my gate was unexpectedly 1 km away from the airport stop. Accordingly, I put down the sprint of my life and arrived at the gate wet to the minute. I tell you to really plan enough time or make sure you have enough money and find the right connection. Because luckily, thanks to my dad's instructions, I had planned 2 hours to the airport, otherwise I would never have made it.
I still love the city, just because of the many culinary enlightenments and nice people I have experienced and met, but living there is no longer so high on my TO DO list.
But for a city trip the city is my absolute recommendation!